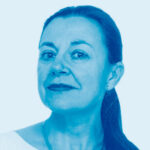 An interview with Prof. Ebba Ossiannilsson on 22 October 2021

I started getting involved in 2002 at the UNESCO Conference, which was also when the term “Open Education Resources” was coined, and the concept and the purpose of it was coined. At the same time, I was working with a European Commission ERASMUS+ project on Geographical Information System (GIS) and we picked up on the idea to build our project on OER. So we did that and we built micromodules from two minutes to two hours to two weeks up to a full international Master on OER and we had that project for around five years. It was at that time that I became deeply immersed in the area of Open Education and also microlearning, because OER and microlearning are very close together. After that, I got a lot of promotions and assignments from that project because it was at a very early stage in the movement and there were not many people working on it.

Have librarians supported you on your Open Education journey, whether the beginning or the middle or more currently?

That is a very nice question, but unfortunately, I have to say no.

On the other hand, I personally always promote the work of librarians because I think, especially nowadays, librarians have the main responsibility and there are many stakeholders within the area, but librarians have so much knowledge, and experiences in this field. They are the backbone for how to search for sources and this kind of thing, so they are really important and I always promote librarians and the role of the library.

As I said, I started to work with Open Education and OER back in 2002, and at that time I also worked at Lund University in Sweden, so of course I’d say the learners and students benefit from it, and I should say as well that this was part of a European project and all the materials were translated into all the partners’ languages, so plenty of learners and students. Currently, I’m working more at a policy and strategy level, and at an international and national level, so on a broader perspective, the work of Open Education and OER benefits all people. It is also noted by UNESCO that the only way to provide qualified educational resources is to work with Open Education and OER, otherwise, if all the people out there in the world were to have access to qualified education, you would have to build one university a day and that is not possible, neither desirable.

And also, I will stress that OER are crucial to reach the SDGs (Sustainable Development Goals), especially to the SDG4: Education for All, and all those pillars about equity, equality, lifelong learning, quality, inclusiveness, accessibility, etc. It seeks to “ensure inclusive and equitable quality education and promote lifelong learning opportunities for all” by 2030. It’s also already stated by UNESCO and the United Nations that education is a human right, as well as social justice, so we want to take that perspective on social livelihood and human rights and qualified education for all, and OER and Open Education are one of the most important tools to help achieve that.

What would you see as key successes in the Open Education movement so far, and starting from your own experience?

OER, I think, has gone through a very long process and sometimes I wonder why, because for Open Science and Open Access the pathways have been much quicker.

First of all, if we count back to the timeline when, as it started in 2002, there have been so many conferences, so many declarations, so many commitments, etc. and finally, in 2019, we got the UNESCO OER recommendation adopted by all Members. But still, it took a very long time to get it implemented; there’s a lot of talk about it, but then, of course, there’s a lot of actions as well, but maybe those actions are more like silos, or it’s happened here and there but it’s sometimes very difficult to get an overview of what is really happening.

OER, I think, has gone through a very long process and sometimes I wonder why, because for Open Science and Open Access the pathways have been much quicker. So, it seems education is still some kind of one-man-task, so to speak, at many universities. When working a lot on Open Education and working with OER, we really need to work together and collaborate and do teamwork, because there are so many perspectives on it, in terms of learning design, pedagogy, subject matter, etc. and you need a comprehensive team, and, unfortunately, in many universities that has not happened, or been prioritized.

What still needs to be done for Open Education to truly take hold?

Also there are so many stakeholders involved, it’s not just an issue for the teachers of the institution, it is an issue for the society as a whole. So what is needed, I think, is that now that we have the UNESCO OER recommendation we need to look at the five areas within the Recommendation, and those are about:

And in addition, on monitoring and evaluation we really have to look at the areas carefully, both in depth and breath because so many people think that OER is just open textbooks or some kind of resource which you can find on the Internet. We also have to be really aware of the fact that many people still think that when they find resources on the Internet they think and consider it as OER.

The beauty and meaning with OER and Open Education, is that one is always acknowledged and  recognised, and if certain material is useful, it might be adapted to one’s own context, culture, and  own country. And also, maybe, we need to stop just producing material and really build on what is already done, with the use of the recognized five Rs, retain remix, reuse, revise and redistribute, those coined by David Wiley, but also the 2 newly added Rs, namely, first, recognition. You need to be recognized if you use OER and work with Open Education because that is a priority, that should be a priority. You should be recognised if you are using it, using material from others and further developing materials created by others. The other of these two newly added Rs is recontextualizing, because maybe there is some kind of material that is useful but you need to adapt it to your own context, your own culture in your own country. So we will argue for those two Rs. And we will argue that we need to stop producing new material because we really need to build on what is done already.

At an international level, we now have the UNESCO OER Recommendation, but there need to be incentives at a national level, and of course within the institutions and the partners, whoever is working on it. There needs to be incentives for that and there needs to be time because this can’t be done just on top of everything else. I also think it’s important to work on monitoring and evaluation, so figuring out what are the benefits, and that means, and thus there is a need for, a change or redefinition of the quality agenda. What is quality when it comes to learning? Both for the individual but also for society. Both short time and long time perspectives need to be considered. So maybe one has to ask oneself what each of us can do, and what can my organisation do? And don’t just blame the government or blame someone else that nothing is done, but really go into yourself and see what you can do. I like my work as an advocate, and I like where I can work and advocate together with the ICDE OER Advocacy Committee because together we can make a difference.

What are your plans for the future with Open Education?

Not everyone would like to go to a formal educational institution or to do a course and take the exams and or degrees, but most people would like to learn, because they have a burning interest and motivation in the subject, and or just the joy of learning.

By November 2021 we will have held the ICDE World Conference online, it is focused on Open Education and OER, as we have that in our strategy. A workshop we’re hosting there is on Open Education, Open Educational Resources, and Open Science and how these are linked together. I think we shouldn’t just talk about Open Education Resources or Open Science, or whatever it is, in isolation, but rather we need to see how all of those open movements are working together and also are nourishing each other or maybe, sometimes, even hindering each other. We need to see the ecosystem of openness. Within the workshop, we are aiming to have a kind of white paper and maybe out of that will come an OER Recommendation about Open Science. This was discussed in May, 2021 by UNESCO and will hopefully be out sometime in November. So to bring all of those movements together because then Open Education can be scaled up and be a reality. Each and everyone for the best in terms of human rights and social justice. And it is also important to stress that because education is paid for by tax money and it should go back to the taxpayers.

Another ambition I have is to move the discussion on OER and Open Education outside the educational institutions, out to society, to the people out there, as I mentioned to museums and other kinds of organizations, because we need to meet people where they are, and also to better merge formal learning, unformal and informal learning. That is what I believe is important, because OER plays a role for informal and non-formal learning, because people can learn by themselves with self-regulated learning and it also is for the lifelong learning perspective, and currently that is very high on the agenda worldwide. Not everyone would like to go to a formal educational institution or to do a course and take the exams and or degrees, but most people would like to learn, because they have a burning interest and motivation in the subject, and or just the joy of learning. That’s the reason why it is important to have free, open and qualified materials available to all people. I think that it is very important to move OER out to society and to the people.

I am also working with the UNESCO Futures of Education: Learning to Become initiative, which is a global initiative reimagining how knowledge and learning can shape the futures of humanity and the planet. This is a really different perspective because it is time to start to ask about what the needs of learners and society and then ask what universities and the educational sector can offer to learners provide support or work together with that. They also argue for the urge of a new social contract for education.